Outstanding Canna Intrigue would be one of the most distinctive and architectural foliage plants I grow.

Intrigue has long slender leaves that are a purple and brown bronzed tone. 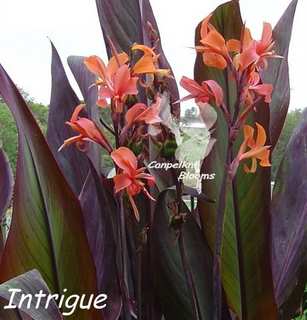 The canna flowers are an apricot orange color and they progress through to a pink tone.

Like many other exotic plants Intrigue was raised in the United States of America by Herbert Kelly Jr. 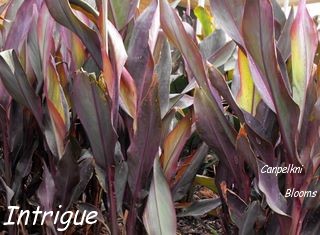 Herb Kelly created a spectacular distinctive new canna as the growth on Intrigue is very upright in habit, which makes it ideal for planting in a perennial flower garden design or to fill in small spaces where some height is needed. 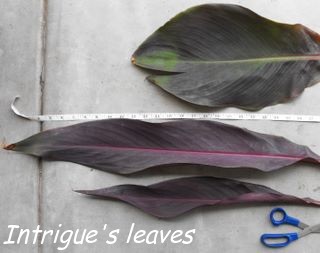 The leaves are very long and slender when compared to other cannas and its not unusual for them to reach over 30 inches in length.

If you like unusual foliage plants, then this is one to consider.

Often Intrigue will produce a new shoot that splits into two separate stem growth, as seen in the pictures below, there is one new rhizome growth that has split and is shooting two new eyes. 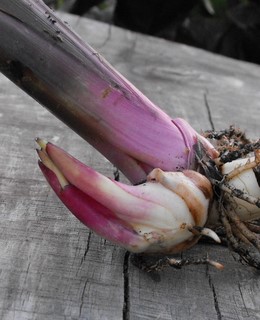 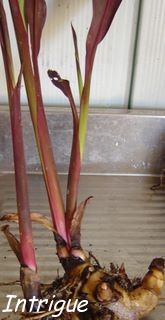 Here is another plant of Intrigue where you can see the two stems after they have split and separated, you can see in the picture the grove between them in the center leading down towards the canna rhizome.

Often this canna will also split its stem at a much taller height; I’ve had this happen on a few occasions at and above one meter tall.

This appears to be a trait for Canna Intrigue as a recent visit to a friend’s I saw several plants of Intrigue that were showing this same stem splitting behavior.

Intrigue is a tall growing canna, the tallest I’ve had it reach is 2.5 meters, and this height is measured from the ground up to the top of the flowers, and it also produces canna seeds.

Often grown just for its tropical foliage and not for its canna flowers which appear later in the season when compared to other canna varieties.

From Canna Intrigue back to Varieties

Return to the home of Cannas Australia 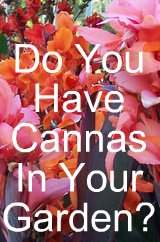